Most of my chess preparation and studying used to revolve around Chessbase products. I stored my databases and notes in .cbh files, used computers with the Chessbase interface to study and do preparation, and used the tools that Fritz 12 gave as an aid.
Unfortunately, Chessbase doesn't seem to make these products for the OS X operating system. What software is there that lets me study chess, open .cbh files, and use chess computers on a Mac?

I highly recommend Scid ("Shane's Chess Information Database"). Here's a screenshot of the Mac version (more to be found at Softpedia): 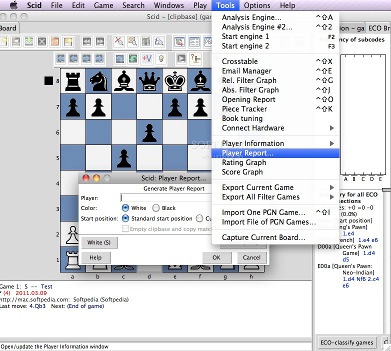 It is completely free, has lots of functionality, and is fast (handles my 5.2M game database quickly and fluidly). I have only used Scid in its linux and windows versions, not the Mac. But from what I understand there are no appreciable differences in the software across these operating systems, and I've certainly never noticed any real differences between the linux and windows versions in my own use. A few notes:

1. Scid cannot open .cbh files directly, but you should be able to use the Chessbase products you've been using to export to PGN, which Scid can then import into databases in its own format.

2. This doesn't apply to you, but for those who have never owned Chessbase but do have some Chessbase files that they'd like to import into Scid, there is a way to do so without buying any Chessbase products, at least on a PC. The old Fritz 5.32 is now freeware, and can be used to convert Chessbase files to PGN. (Amazingly, I know of no other free program that can do this; maybe someone else does.)

3. Scid plays very well with chess engines for use in analyzing games. I have Houdini 1.5 (the free version before it went commercial with 2.0), some version of Stockfish (free), and some version of Crafty (free) in use with my Scid.

4. One potential drawback, but only if you're on an older OS X: you can download the Mac version here, and it is pointed out there that the executable is available only for Mac OS X 10.5 or later; if you're using an older version, you'll have to build the program from its source code. They have instructions for doing so though, so it might not be too big of an issue anyway.

5. While I'm at it, I'll point out that some other developer made a free android app called Scid on the go, which I have used on my android tablet. It's scaled down from regular Scid quite a bit, and I've really only used it in a read-only way (data entry's not really fun on a tablet anyway IMO). But I have my big games database synced across devices using dropbox, and it's nice to be able pull up games when I've only got my tablet with me.

I'll end by adding that Scid is the only database program I've ever really used, so do know that my recommendation comes without me having much experience with Chessbase or other commercial alternatives to compare it to. But that's also because I've never had any reason to; Scid really is geat, and again, all the software I've mentioned here is completely free.