I was wondering if there is any command to get the mode of the probability distributions. Calculating manually, the mode is (alpha-1)/(alpha+beta-2)

While the mean, median or variance of the beta dist can be found. For example, the mean can be found using this following command:

As suggested by @kguler , this command ArgMax[PDF[BetaDistribution[2, 3], x], x] works perfectly fine. However, when I changed the value of the parameters to something like thousands, the running process took a very long time.

Is there any other command that will produce the results much faster?

Let's develop this solution in steps, asking Mathematica to simplify as much as possible at each stage. First, the distribution itself:

(Bear in mind that this is defined only for positive values of $a$ and $b$.)

Now, its logarithm. Take care to avoid places where the distribution will be zero or undefined:

We plan to inspect the zeros of its derivative for the mode:

The critical points will include all zeros of the derivative:

If we're working blindly with an unfamiliar distribution, we had better check the endpoints to make sure that one of them isn't actually a mode, too. This can be problematic, because Mathematica often will have trouble finding the limiting values for symbolic parameters $a$ and $b$. One alternative is to explore the situation graphically and manipulate $a$ and $b$ over reasonable ranges: 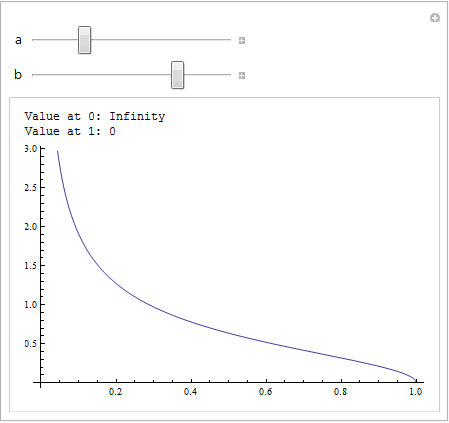 This will quickly show that